This post is more of a follow up on my progress on Ingress rather than a direct continuation from the previous three parts here, here and here.

So since the last update I’ve become more and more involved with Ingress. I joined the Enlightened East community and carried out two Operations (called Ops) with them. It was actually pretty fun, doing military style operations in the middle of the night, taking screenshots of our achievements as proof.

Anyway, before I can brag, Ingress does have a couple a new things: a New Shield, New Badges and Missions!

New Shield
The new shield is called an AXA Shield. It’s very rare, gives 70 shielding and is able to make a portal immune to virus attacks. Not really excited about this.

New Badges
Apparently, too many portals have been submitted so there’s a severe backlog. Niantic isn’t accepting anymore portal submissions from 1st Jan 2015 until further notice, so this means that the Seer badge won’t be available for a while. Portals submitted before 1st Jan 2015 will still be considered, so if you’re lucky, some of your submissions might be accepted.

So due to one badge effectively being taken away, three new badges have surfaced that will count toward leveling up:
– Trekker. Tracks your walking distance
– Engineer. Counts how many mods you’ve deployed.
– SpecOps. Counts how many unique missions you’ve done. (See Missions below)

Missions
Ah Missions. This is what I want to talk about. Missions are individual jobs, but have no reward but a badge to show that you’ve completed the mission. Each mission consists of a set of instructions to complete, sometimes in sequence and sometimes in any order you choose. Usually it’s hacking certain portals, but it can also be as simple as visiting a waypoint or as hard as capturing or upgrading a portal, installing a mod, creating links or fields and even answering puzzles using the clues they provide.

Missions are quite fun for me on several levels. First, this catered to my naturally individualistic tendencies; I could complete the missions alone, without having to rely on help from anyone else. Missions were also objective based as opposed to maintenance based. i.e. I had to go out and accomplish a goal, rather than wait for something to happen and react to it.

Going out to complete a specific mission felt better than just going out to take portals and create fields. To me, I felt that there was more of a sense of achievement from completing the missions than creating links and fields just to work towards the badges to level up. Right now, I’m Level 10 and I’ve already got enough AP to move on to the next level, but I’m lacking one Gold badge (I need six Silver and four Gold badges in addition to six million AP).

As of now, I’ve completed a total of 16 unique missions. I wasn’t aiming to get a Gold badge for anything in particular, but doing missions naturally works towards the rest of the badges. Right now, after yesterday morning’s 11km walk, I’m just 27 unique hacks away from leveling up! 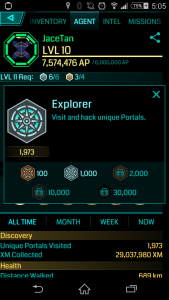 Yesterday morning, after I booked out from camp, I went for a walk down towards Still Road, with the intention of completing two missions in the area. Along the way, I discovered three more missions which I did on the spot, but didn’t complete one of the original missions I wanted to do because the Singapore Food Trail #2 mission really took a long time. This is my whole route on Runtastic: 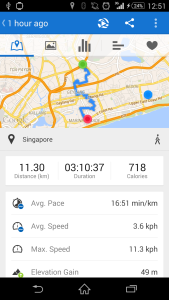 Yeah that’s right, 11km in three hours, with my backpack full of stuff. Okay sure it wasn’t the ten pack items for route march, but still it was quite tiring. My shift was at 2am and I hadn’t slept since then.

Here’s an expanded picture with the location of the missions I did. 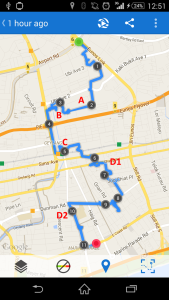 Each letter represents the place where I completed the mission, except for D1 and D2. Those represent the start and end points of the fourth mission I did, which was the first mission I’d intended to do. I hadn’t realised that the portals would be so far from one another.

Anyway, the missions I did at point A, B and C were the Tour of Ubi Tech Park, Lor Koo Chye Sheng Hong Temple Visit and Uniquely Singapore 12/18 – Paya Lebar. Nothing particularly interesting, just hacking portals in any order.

I initially thought all the portals were within a kilometer of each other at most, because they all had about the same distance from where I was standing. Usually, in the missions I’ve done, the portals were beside one another, or perhaps just further down the road, but at least it was in the same direction. This mission had portals in several directions, but I saw them all as about the same distance from me. I feel more than a little foolish, but hey, I completed it.

No, I didn’t eat with the mission, although I did demolish a 1.5L bottle of HTwoO.

Look back at the path I took. D1 was my start point and D2 my end point. See, A, B and C were all clustered missions, but this really was a food trail. Ah well, it was good anyway. I hit so many new portals. I think just a couple missions more and I should be able to level up.

Talk wordy to me Cancel reply